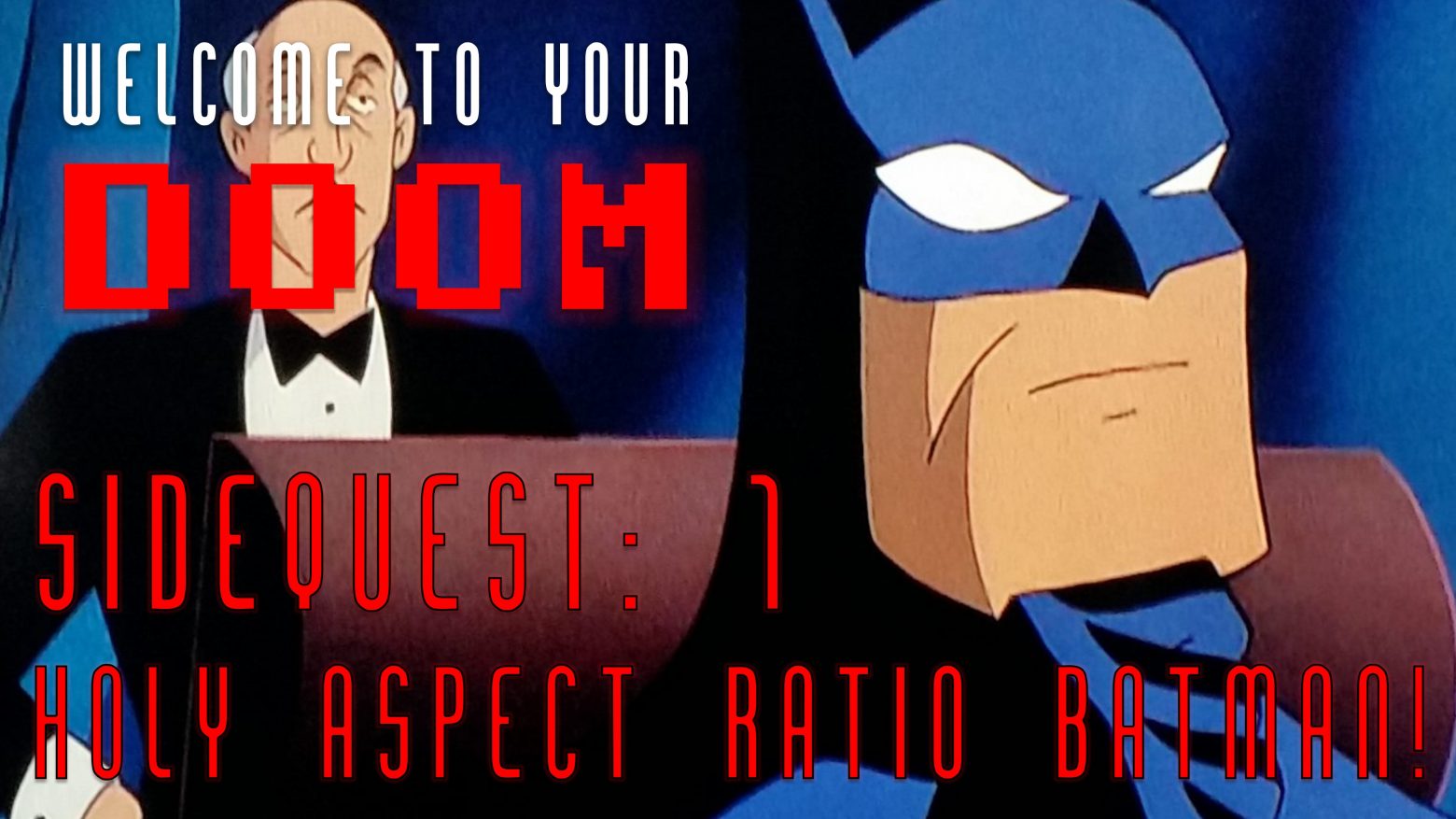 Gang, I was wrong.

In Episode 2.1 of the Welcome to Your Doom Podcast, I very confidently stated, with 99.8% certainty, that the native aspect ratio of the film Batman: Mask of the Phantasm was 4:3. After doing some research, I discovered that was not the case.

To say I was wrong is accurate. The film was initially released in the 16:9 widescreen aspect ratio with the intent that the film was to have a cinematic release and not be direct-to-video. In fact, if you select the fullscreen 4:3 version in the DVD, it starts by saying “the original film has been modified to blah blah blah it’s not the native size, deal with it sucka!”, or whatever it says.

However, to say that the 16:9 aspect ratio is the “correct” format to watch the film in is another story. I would like to present some of my findings that will hopefully have you reconsider the aspect ratio you watch this film in, and hopefully redeem myself for my mistakes.

Why Did I Think The Aspect Ratio Was 4:3?

Transformers: The Movie was released in September 2016 on Blu-Ray for the film’s 30th anniversary. I bought it from Costco a day or two after it was released (what isn’t Costco good for?!). The second I got home, I threw the movie into the PS4. I chose the widescreen disk because it’s not the 1980’s anymore and I wanted to see this film in all the HD glory only Blu-Ray can deliver.

Then when the film began playing, I noticed something. Something I never really noticed before. Probably because I’ve seen the film close to a gazillion times in my life and don’t really need to watch it to know what’s happening. But this time I was watching intently, and noticed that shots looked strange. Some characters’ heads were being cut off at the top, and some shots were framed awkwardly close to the focus of the shot. I realized that the other disk in the box was actually the fullscreen version of the film, so I decided to pop that in and take a look. My mind was blown. The damn movie was cropped to be 16:9. That explained why things seemed so close and strangely framed.

I immediately popped in Batman: Mask of the Phantasm and to my dismay, it appeared that my favorite Batman film’s widescreen version had also been bloody cropped!

…or so I thought. I never did the research into it aside from eyeballing the two sources. That is, I would watch one, then pull out the DVD, flip it around to the format on the other side of the disc (yeah…that was a thing), watched that version, and finally compared them in my head. Not exactly a science, sure, but I was sure what I saw was the 4:3 version being cropped.

History of the Film’s Aspect Ratio

When Warner Brothers Animation was first making the film, the intention was to release this film direct-to-video. As such the intended aspect ratio was 4:3 to accommodate television sets in 1993, which were predominantly fullscreen format. It was not until late in production that the studio decided to release this film to the theaters instead of straight to VHS. As such, this left the animators less than a year of production time to handle accommodating a new aspect ratio. Presumably, the shots that were completed or being worked on at the time of the format change must have been in a 4:3 ratio. This would mean that these shots would need to be converted in some way from 4:3 to 16:9. Typically this would be done by just hacking off some space at the top and the bottom of the frame, which is what I thought was done, but then I decided to compare the two formats and found some interesting differences.

Compare this against a film that was composed in fullscreen, and was converted after to 16:9 for a widescreen release like Transformers: The Movie. The comparison will show that the cropped 16:9 version cuts off the top and the bottom portions of the 4:3 shots, but adds no extra content to the sides of the frame, which is not the case with Batman: Mask of the Phantasm.

As I stated before, in 1993 most of all consumer TV’s accommodated a fullscreen resolution. Today, most of all consumer TV’s are widescreen. Since most films are released in theaters first, or the direct-to-video films are going to be played on widescreen TVs, the aspect ratios are typically designed when filming/animating a film to be 1.78:1 to 2.40:1.

Since the films are being designed and produced for widescreen viewing, we typically only have 1 format per Blu-Ray. But Batman: Mask of the Phantasm is going to have both widescreen and fullscreen. Why bother including the fullscreen version of the film if it’s native resolution is widescreen, and the 4:3 format will not even fill the TV? Did Warner Brothers simply want to spend more on materials? Or is it because there is more information in the 4:3 format?

For Transformers: The Movie, I would argue that this is precisely the reason both formats are included. The widescreen format is included for the audience that has no interest in seeing black bars on the side of the screen. But the fullscreen format is also included for those that are well versed in film, and want to view the movie as it was intended to be presented. This isn’t to say if you prefer the widescreen version you are wrong. It’s a preference. That’s why the studio included both versions so you can pick your poison.

So, back to Batman. In my opinion, despite the film having an original format of 1.85:1 (as listed on IMDB), the fact that they are also releasing the fullscreen version on Blu-Ray in 2017 indicates that it’s worth evaluating.

Another interesting thing I noticed while digging into this is that the negative of the film is listed as 1.33:1 (4:3) on IMDB’s technical Specifications for the film. I’m not smart enough to know exactly what that means, but I thought it was an interesting tidbit I wanted to include in here.

What Format Do I Watch?

I watch the film in the 4:3 ratio, and this was the shot that finalized the decision for me when I was first evaluating the formats after the Transformers debacle. The 4:3 version, in my opinion, is far better framed. The focus is both the Joker’s eyes and smile in this shot, and in the widescreen version that information is lost. This is just one shot in a wonderful film, but there are other examples that illustrate this as well.

To say this is a “simple crop” though, is wrong, and I will totally own that. I think the format you choose to watch is going to completely be in the eye of the beholder because both versions look great. The correct way to watch this film is the way you like to watch it. Personally, I’ll stick to my 4:3 because it delivers more for me.

Which version delivers more for you?

Thanks for listening to my rant/desperate attempts to defend my madness. Until next time folks, cheers.